Coyotes are a member of the canid family as well as wolves, foxes, and the domesticated dog.  While they may share similar characteristics, the behavior of coyotes and poodles are very different.  However, one thing that they definitely have in common is a territorial behavior that includes scent marking.  If you have ever let your dog out around another dog then you have probably seen him making the round urinating on bushes and other objects to warn the intruding dog that he is staking out his territory.  Coyotes are the same way.  When establishing a home range or territory, male coyotes will urinate on certain objects or areas to establish their boundary and let other possible intruder coyotes know that the land is claimed.  Another not so well known scent marker that coyotes use to establish territory is strategically placed scat. Basically, coyote scat is another term or way to say coyote excrement, poop, dung, or feces.  Scat is the general reference that most people use to refer to these coyote droppings.  Analyzing scat can help you not only determine what animal has been in the area, but also what kind of diet they eat, or even the health of the animal in some cases.  In the wild or rural areas you may come across a variety of scat from bears to bobcats, but coyote scat is recognizable by a few signs to look for and is recognizable by their diet and placement. In areas where the coyote population mixes with the wolf population, coyote scat can be harder to tell apart.  While coyotes are smaller animals in size, weighing 30-45 pounds, they generally have large droppings for their size. Coyote scat will vary in size but a typical scat will be several inches long and about one inch in diameter.  What you see in coyote scat will largely depend on what time of the year it is.  In winter, scat will be darker in color and will contain more fur and possibly bones of their prey.  The darker color is due to the blood content from digesting their animal prey.  The fur will cause the scat to become twisted and be rope like.

In warmer summer months, coyote feces will be comprised of more plant matter and will appear lighter in color and have less fur, if any.  The bright color is usually due to large amounts of berries, the coyote’s favorite fruit snack.  Coyotes will also eat grass at times.  One of the reasons they do this is to clean out their digestive systems and help process their prey or even remove intestinal worms from their system.

Coyote feces do not generally have an odor to them, and if they do, it is more of a subtle musty smell.  This is a good way to tell domestic dog and coyote poop apart.  You can also tell apart wolf and coyote scat by the animal content inside.  Coyote scat will contain fur from smaller animals such as a snowshoe hare or insects, whereas the wolf will have larger prey like deer or elk in their scat. A coyote will use the fact that their scat is easily recognizable to their advantage.  One of the most common ways they use their scat is to make identifiable markers in their territory for other coyotes to see.  This is why you will likely find coyote scat on trails, crossroads, the side of road, walk ways, or any other travel route.  They will also use the scat placement to communicate with other coyotes within their pack.  In fact, coyotes will generally relieve themselves directly in the middle of a road to make sure that their droppings will be seen by any other coyote that dares to intrude on their home range. 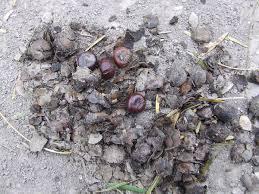 If you happen to find coyote scat in your yard or the roadways near your home, this most likely means that a pack of coyotes have taken up residence in the area and have a territory they will defend from other coyotes and even pets.  If you find these droppings in your yard, you may want to start keeping a close watch on your pets and bring them indoors at night.  Removing the scat is safe as long as you maintain proper protection against touching or breathing in the scat at all times.  Coyote poop can contain many different diseases or bacteria that can transmit to humans or pets with contact.

Coyote Scat – What to look for: