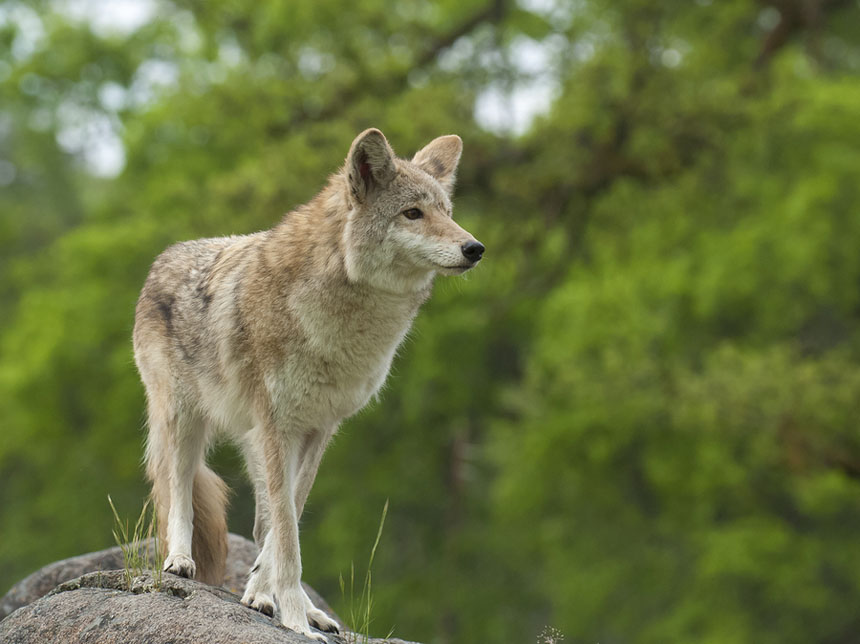 Coyote is one of the most adaptable animals in the world and mostly so, in urban areas because it can feed on anything; from grass, plants, cats, or fish. It is the most rapidly expanding species and can be found in many parts across the United States. These animals are monogamous and live in pair bonds for several years. Coyotes living in the cities usually display nocturnal behavior, but will also hunt during the day. Coyotes travel in packs but hunt in pairs, targeting their moles, dogs, cats, ground squirrels, and other livestock.  The average coyote weight depends on the region and climate characteristics of that particular region.

They are found in variety of habitats, mainly open grasslands, and broken forests. They are reproductive and have the potential to give birth to 12 pups at a time. The average weight of male coyotes is around 8-20 kg and females are 7-18 kg. Northern animals are usually larger than those to the south. In Mexico, the average coyote weight is around 11.5 kg and 18 kg in Alaska. The largest coyotes are found in the northeastern United States, which could be due to hybridization with Clapus or other genetic factors or is simply a phenotypic response to enhanced nutrition.

It is important to note that coyotes belong to the canine family, which is the most challenging of any mammals. The average coyote weight increases from West to East indicating some degree of hybridization. The average weight of coyotes in Minnesota is around 25 to 35 pounds i.e. 11.3 to 15.9kg), Wisconsin up to 45 pounds i.e. 20.4 kg and New England around 60 pound i.e. 27.2 kg.

Climate impact on the weight

Coyotes weigh more during the fall and early winter but weigh considerably less during the pup-rearing period, which is during late winter and spring. Therefore, comparing coyotes from the West in early fall to those of the Midwest in summer would not be a valid comparison.  The average weight of coyote of adult northeastern male falls within the range of 31 to 45lb with an average of 36lb. Similarly, the average weight of female coyote will be around 26lb to 40lb with average around 32lb.

It is determined that the average weight of coyotes outside of the Northeast to be 27lb for males and 23lb for females. Male coyotes are approximately 10% heavier than females regardless of any regional differences or climatic differences. The male western coyotes are 74% of the size of the northeastern male coyotes. The reason for such a difference is mainly the integration of wolf genetics into the eastern coyote population.

Adult male coyotes in the southwestern United States, from California or New Mexico weigh at an average of 24 pounds. It is argued that the huge difference of average weight between to region could be due to hybridization and interbreeding with both coyotes and the population of hybrid coyotes or wolves, which take place in southern Ontario.

Weight in relation to the size of the coyote

The difference in average weight of Coyote based on region is attributed to hybridization and interbreeding. It is interesting to note that coyotes from different regions weigh differently. This shows that the environmental factors greatly impact the development of coyote growth. However, one could see the difference between male and female coyotes and the same is evident across different regions, cities and across the country.

However, it is important to note that coyotes are only one-quarter to one-half the average weight of wolves, i.e. 20-40 pounds. The weight of animal is relative to its size and more the size, greater will be its weight. Coyotes grow to be about 2 feet tall at the shoulder, about two and half feet long, with thick fur weighing around 20-35 pounds.     At the time of birth, the young weighs about 250 grams, and later gains weight on daily basis till it achieves adult weight at about nine months.

The size and weight are interrelated because the weight will increase or decrease based on the size of the body. It is important to note that because of its body size and weight, coyote is swift and slow in its action, while making a kill. Since its appearance resembles a dog, it is easily adaptable to the urban areas and can feed on literally anything. However, it is interesting to learn that coyotes all over the country are not same in size or weight.

The regional differences, in terms of climate or landscape, make the appearance of coyote either heavier or lighter, big or small; thus, making life dangerous for people. The average weight of coyote is 18 and 20 for female and male respectively. And the fact that the change in size and weight may also be due to hybridization and interbreeding shows that this species is increasing its population rather quickly.

These species are dangerous to the human habitation and despite the fact that the US government kills nearly, 400,000 coyotes every year, the population is increasing. Coyotes are the most common and most serious predators of livestock in the United States. They cause a majority of predation loses of livestock. It is alleged to spread rabies. Bounties against coyotes were offered in early 19th century. This animal is a dangerous species that poses threat to livestock and human safety.